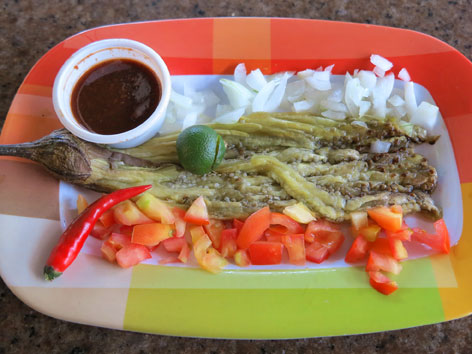 What: Ensaladang talong (“en-sah-lah-dang tah-long”) is a simple, refreshing salad that pairs grilled, peeled eggplants (talong) with tomatoes, white onions, and chilies. The eggplant is grilled over hot coals (or a gas flame) until it’s tender inside and charred black outside. While still smoking-hot, the skin is peeled off and its innards dressed with vinegar or kalamansi juice; salty bagoong (fermented shrimp paste) is usually presented at its side as a flavor counterpoint. It’s pretty low-calorie—it doesn’t use any oil—and if you omit the bagoong, it is a totally, if unintentionally, vegan salad…which, of course, makes it a great dish to pair with meats and fish, like pritong isda (fried fish, see entry) crispy pata (deep-fried pork leg).

Order: One order of ensaladang talong here is Php 65, designed to accompany the many grilled options at Ineng’s, from pork belly to squid. It comes neatly laid out with chopped onions and tomatoes bookending the smoky grilled eggplant. Sliced kalamansi stands in for vinegar, a red chili adds heat as you wish, and a fine fermented shrimp sauce contributes saltiness. The salad itself was pre-assembled on its plate, waiting to be chosen by the next customer walking up to the stall, but that didn’t seem to affect the dish’s quality, which tasted fresh. If the utter lack of oil seems utterly strange for anyone more used to Western-style salad dressings, know that the kalamansi worked just fine, especially when dabbed with a bit of the salty bagoong. We paired ours with a few sticks of pork barbecue and some white rice for a very satisfying meal.

Alternatively: Chic-Boy (short for chicken + baboy, a.k.a. pork!) at 112 Jupiter Street in Makati (map) presents a pared-down version, pairing a whole grilled eggplant with a dollop of bagoong for you to slice or mash-and-mix to your liking. Popular chain Recipes (632-772-2216; multiple locations including Corte de las Palmas, 2nd floor, Alabang Town Center, Muntinlupa City, map) adds a twist to the usual set by throwing some chicharon (pork cracklings) into its version, which is called—what else—chicharon-eggplant on its menu. (So much for that vegan idea!)