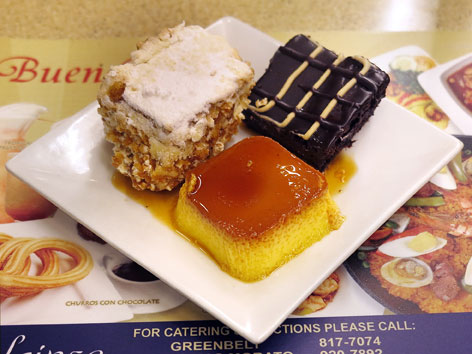 What: A very sweet steam-cooked milk and egg custard with a runny caramel sauce, leche flan (“leh-cheh flan”) is a dense, rich, and very popular dessert found (in one shape or another) on most restaurant menus. Its main ingredients are canned milk (both evaporated and condensed), egg yolks, sugar, and vanilla essence or the zest of dayap (“dah-yap”), a local lime. Its closest cousin is crème caramel, and while its name is decidedly Spanish (from flan de leche, or flan of milk), it owes its heavier texture and extra-rich taste to the marvels of American-era nutrition: canned evaporated and condensed milk. Using whole milk usually results in a lighter and thinner leche flan, and not quite what is considered ideal around here.

Where: Dulcinea (632-752-7110; multiple locations including 2nd floor, Glorietta 4, Makati City, map) is a casual restaurant chain that’s been specializing in Spanish cuisine since 1963. Its branches, like this one inside Glorietta mall, usually have a patisserie display case where you can view your choice of sweet snacks and desserts.

Order: We selected our leche flan (pictured at front of plate) from Dulcinea’s glass showcase of goodies—wrapped in a little square foil ramekin, it is offered here as part of a dessert sampler for Php 99. (There was no harm in trying more than one sweet, after all.) We slid the flan out of its shiny prison and overturned it as directed—and nearly flooded the entire plate with the caramel sauce that came pouring out. Despite the mess, this leche flan was exactly what we were looking for. The oh-so-subtle hint of vanilla and burnt undertones of the caramel contrasted well against the sweet and milky, slightly eggy, firm-but-creamy custard. Incredibly, it was not overly rich. The only thing that stopped us from ordering a second flan was the fact that we had two other desserts on our plate (although they were both eclipsed by our experience of the leche flan).

Alternatively: Look for this on the dessert menus of most Filipino-style restaurants, which generally offer single-size portions. But if you have friends to share with, try the leche flan at Conti’s (632-856-2352; on the ground floor of Serendra, Bonifacio Global City in Taguig, map): Available for takeout and designed for a group, it’s 180 pesos of pure leche flan goodness, so smooth, dense, and custardy—and dangerously easy to keep spooning into your mouth.