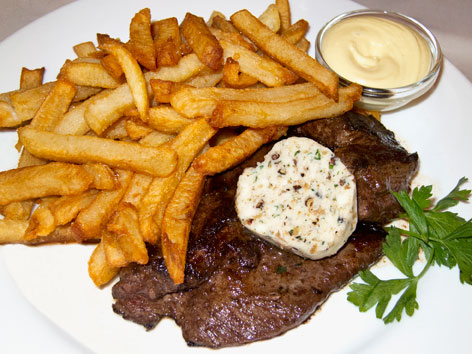 What: In the years between its founding as a French settlement in the mid-17th century and its official francophone status today, Montréal has sometimes struggled to maintain its Frenchness—there was that pesky British conquest in 1760, the divisive French Canadian vs. English Canadian war politics of the 20th century, sovereign-rights issues in more recent decades, even ongoing concerns about perceived anglophone threats today. But through it all a hefty dose of French culture has prevailed that is most certainly witnessed (and tasted) in the city’s dining scene, where Parisian-style bistros have long been in demand.

Some of the grand dames might seem almost stodgy alongside the newer wave of cuisine de terroir restaurants, but you simply cannot come to Montréal and miss out on a classic French meal. Here we will consider some of the best spots in which to experience French Montréal in all her glory, along with the most traditional (and delicious) must-order dishes.

Where: Opened in 1980, L’Express (3927, rue St.-Denis, map) successfully walks the line between cosmopolitan and boisterous yet timeworn Old World atmosphere: It really feels like a Parisian bistro, down to the checkered floor. The solid food and wine menu reads like a greatest-hits of French classics. Reserve ahead if you can.

Order: Pictured is that bistro favorite, steak frites ($28)—hanger steak topped with an addictive herb butter (shallots, peppercorn, mustard seeds, coriander) and served with a pile of excellent fries and mayo. We enjoyed starting with the rillettes, a duck-chicken mix accompanied by toast, and have heard the daily quiche is a good bet, too. (This is if you don’t fill up on the endless bread, mustard, and jar of cornichons waiting at the table.) Other recommended main dishes include the crispy roasted quail, the steak tartare, the duck-confit salad, the pot-au-feu, and the lovely homemade ravioli, a hearty veal-pork-mushroom affair during our visit.

Unfortunately, this is one of those restaurants that’s received a lot of hype over the years and some diners expect their minds to be blown. Resist this urge: The food’s consistently good, but these are straightforward French standards we’re talking about. Show up to have a good time eating and drinking, soak up the mirror-lined room’s joie de vivre, and you’ll leave very satisfied.

Alternatively: Many restaurants in Montréal show strong French influences, but among the other reliable bistro types are Leméac (1045, ave. Laurier Ouest, map)—where, if you order after 10pm, a select menu of apps and mains are $27—and Laloux (250, ave. des Pins Est, map), where more local, seasonal ingredients come into play. And while it’s less a straight bistro, Québécois Le Quartier Général (1251, rue Gilford, map) has the added bonus of being BYOB.