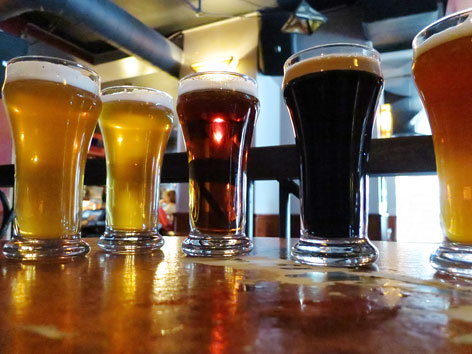 What: Montréal is the darling of eastern Canada’s, and maybe all of Canada’s, beer scene, and for very good reason: In the land of mass-produced Labatt and Molson, Montréal was the first city in the country where brewers began to rethink beer in more creative, handcrafted terms. That was 25 years ago, more or less, and now there are some 20 breweries, most of them brewpubs, in Montréal, and many more nearby in Québec that distribute widely within the city. We won’t list all of them here—just a few of our favorites to be sure you’ll have no trouble staying happily well lubricated in this town. (And we promise you won’t.)

Where: The city’s most renowned brewpub, for good reason, is Dieu du Ciel! (29, ave. Laurier Ouest, map), where you can sit in a cozy, wood-paneled space and sample from around 18—yes, 18—of its famously innovative beers on tap (think nutmeg and aniseed red ale, maple Scotch ale, and a wacky twist on traditional spruce beer that’s brewed with branches of pine, spruce, cedar, and fir). Just down the block from Fairmount Bagels and Wilensky’s Light Lunch, it’s something of a newer Mile End institution (opened in 1998; the original Saint-Jérôme microbrewery, about 45 minutes away, opened in 1991), and an absolute must for all lovers of artisanal beer.

Order: If it’s your first time, try to sample all 18 beers (prices range $2.25-$2.75 for each 6 oz pour), keeping in mind that they’re generous pours and often with a high alcohol content—sharing with friends is recommended! Among our personal favorites during our visit: Morality, a super hoppy, citrusy American IPA; Umami, a roasty “morel beer” brewed with mushrooms; the seasonal (springtime) Solstice d’Été, a tangy and refreshing sour wheat beer brewed with raspberries; and Péché Mortel, an intensely rich, beautifully smooth imperial stout and DDC signature beer offered two ways when we were in town: infused with fair-trade coffee and both coffee-infused and aged in bourbon barrels. It’s way too fun to drink at this place!

Other brewpubs/breweries: Montréal has no shortage of brewpubs, and half of the fun is just wandering into one you pass to try a sampler or a pint. On main drag Saint-Denis, we liked L’Amère à Boire (2049, rue St-Denis, map)—of its Euro-style beers, we particularly enjoyed the two pilsners on offer during our visit: the classic Czech Cerná Hora and the intense 10% ABV pils-on-steroids Valak—as well as Le Saint-Bock (1749, rue St-Denis, map), where there’s a bigger mix of housemade and domestic/imported beers, plus a great patio. Old tavern turned brewpub Le Cheval Blanc (809, rue Ontario Est, map) is said to be a worthy stop on a pub crawl—it was the first Montréal bar to obtain a craft-brewing license, back in 1986—though keep in mind that the widely distributed brand of Cheval Blanc Blanche bottled beer is made by Les Brasseurs RJ, a large merger microbrewery from Le Cheval Blanc and two other regional brewers.

On pretty rue Duluth, Réservoir (9, rue Duluth Est, map) boasts a beautiful sleek space and a tasty stout. More off the beaten path, outside of downtown, is Broue Pub Brouhaha (5860, ave. de Lorimier, map), with a few house brews and a strong selection of other Québécois beers. Finally, we gotta mention McAuslan Brewing (5080, rue St-Ambroise, map): One of the city’s first microbreweries, established in 1989, it’s now more of a larger regional craft brewer, but you won’t leave this town without encountering a few of its sessionable favorites, like the St-Ambroise Pale Ale and Oatmeal Stout. Besides brewery tours (Wed, 6:15 and 8pm; $20; reserve here), it boasts a terrace offering pints, pitchers, and samplers on the biking-friendly Lachine Canal.

Beer stores: If you have your own digs, you’ll want to stock your fridge with some sixers (right?). Marché des Saveurs (280, Place du marché du nord, map), a store just outside Marché Jean-Talon, is a fantastic place to browse for all products du Québec, beer among them. Ask a knowledgeable staff member to help you make some selections; look for offerings from DDC, Microbrasserie Charlevoix, Les Trois Mousquetaires, and BSG (a Montréal-based brewery that specializes in great gluten-free microbrews), among others. Another fantastic option is Dépanneur Peluso (2500, rue Rachel Est, map), which isn’t your average dépanneur (convenience store): A back room is stocked with more than 400 of Québec’s beers for your enjoyment.

Special beer-bar mention: Most bars will carry something local—this is that type of beer-lovin’ city. But in addition to the brewpubs we mention above, you should know about Vices et Versa (6631, blvd St-Laurent, map), which does not make its own beer but certainly sells a lot of the stuff, with more than 30 Québec micros on tap, many of which aren’t distributed outside the province. It’s extraordinarily, uh, educational and enlightening!