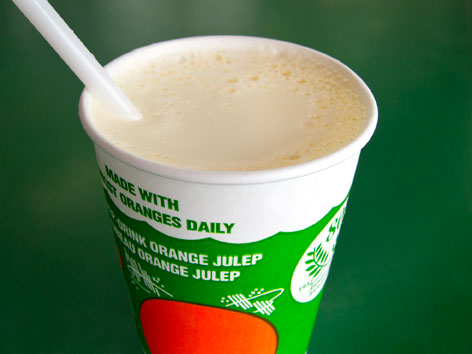 What: It’s native to just one place, but that place happens to be a Montréal institution and a roadside attraction, featuring an impressively giant orange-like orb hanging out at the side of the highway. (You really can’t miss it.) It’s sold alongside beloved fast-food items like hot dogs (by Nathan’s) and burgers and poutine, but the real star here is the Orange Julep, a sugary, frothy, orangey drink that’s a bit like the Orange Julius (if you’ve ever been to a mall, or a Dairy Queen, in the U.S., you know what that is). In truth, the Julius came first, in the late 1920s, and the Julep followed with its own secret recipe, around 1932, when a man named Hermas Gibeau dreamed it up.

Where: There can be only one gigantic orange in town, and Montréal’s belongs to Gibeau Orange Julep (514-738-7486; 7700, blvd Décarie, map). The original storefront, located on rue Sherbrooke Est, was not shaped like an orange; it was when Mr. Gibeau moved locations that he thought an oversize orange might be a nice place to work (and possibly live, with his family). The orb now standing is a larger, three-story rebuild of the original, which was demolished in the 1960s to accommodate the widened highway. Used to be that servers roller-skated around here, but nowadays it’s just a regular little restaurant, with picnic tables; a small, heated-in-winter interior; and classic-car enthusiasts in the parking lot every Wednesday.

When: April-November, open 24/7. During winter, 8am-2am, but dependent on weather conditions (best to call ahead).

Order: Orange Juleps go for $2.70-$6.90 in cups, or you can take a jug home for $11.20. In truth, you probably don’t need that much. Golden and frothy, it’s pretty sweet—definitely refreshing on a hot summer’s day. It tastes like a pulpy Creamsicle, really, which ain’t bad in our book. Apparently, it’s a good hit of Vitamin C, too.