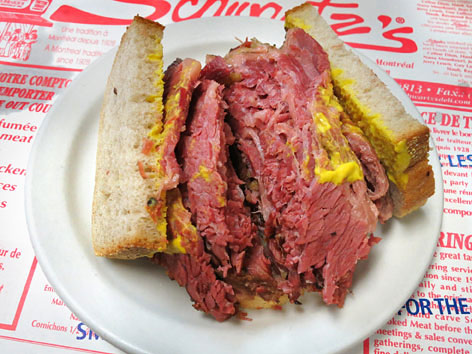 A smoked meat sandwich or plate is a rite of passage in Montréal—an eye-rollingly delicious, carnivorous rite you should undertake whenever possible. But what is smoked meat? Beef brisket is salted and cured (usually dry-cured) with savory spices, and then smoked-cooked and steamed. It’s hand-sliced while warm, and the soft, tender, seasoned red meat is thickly piled onto (or served alongside) rye bread, typically with yellow mustard. Mouth watering yet?

Smoked meat is a close relative of New York pastrami—distinctions include that pastrami is generally made from a different part of the brisket (navel), is more likely to be wet-cured (in brine), and favors different spices. It was certainly introduced to Montréal around the same time (turn of the 20th century) as pastrami was to New York, via the same wave of Central and Eastern European Jewish immigrants. Exact origin claims abound, but one on good authority has smoked meat arriving to Montréal sometime after 1884 with Romanian Jew Aaron Sanft, the city’s first kosher butcher. However it got here, it’s 100% Montréal-deli nowadays.

Where: Let’s be clear: There are many worthy smoked-meat joints in this city, and every local will likely have strong opinions about which is best. But like Katz’s in New York, there’s no denying the deservedly iconic stature of Schwartz’s (3895, blvd. St.-Laurent, map), a single-room counter-lined restaurant established in 1928 by a Jewish immigrant from Romania, Reuben Schwartz (can his name get any more perfect?). Feel free to try smoked meat elsewhere around Montréal, but do not skip Schwartz’s.

When: Sun-Thurs, 8am-12:30am; Fri, 8am-1:30am; Sat, 8am-2:30am (hot meat available after 10:30am). We had good luck avoiding the famously long line by showing up early on a weekday (you can also order to-go sandwiches/plates next door at Schwartz’s takeout joint).

A note about ordering: You can request the cut of meat you’d like in your sandwich: lean, medium, old-fashioned (a.k.a. medium-fatty), or fatty. We recommend one of the latter three, depending on your taste. The leaner the meat, the drier it tends to be, while of course the fattier cuts are richer and meltier—too much so for some people. One of the two mediums is a safe, delicious bet if you’re unsure.

Order: A viande fumée (smoked meat) sandwich ($6.65), served on rye with mustard, or as a plate ($11.25-$14.25), for which the rosy-colored meat is accompanied by a stack of rye and mustard so you can basically build your own sandwich(es). This meat is something special, allowed to “marinate” in its secret blend of herbs and spices (though the counterman told us the mix includes crushed peppercorns, garlic, mustard seeds, coriander, chilies, and a little dill) for 10 days or so before being slow-cooked inside Schwartz’s 80-plus-year-old brick smokehouse (the meat is steamed just before serving). The medium and fatty we tried were moist, rich, super tender, and eminently satisfying. Pair it with some pickles and a Cott black cherry soda, the local favorite (equivalent to drinking a Dr. Brown’s with your New York pastrami).

Alternatively: Among other Montréal delis, spice rubs and preparation variances mean that smoked meat tastes a little different everywhere you go. One local sent us to historic Lester’s Deli (1053A, ave. Bernard, map), where the tender meat had a totally different texture—smoother, more like thick-cut bologna—and a lighter-pink color. We preferred Schwartz’s more flavorful meat, but loved Lester’s old-school atmosphere and devoured the crispy, fresh-cut fries. (Also on the menu there? Smoked meat poutine.) Another popular spot is Main Deli Steakhouse (3864, blvd. St.-Laurent, map), located just diagonally across the street from Schwartz’s—it’s especially a good idea when the line’s too long to deal with there—while others swear by the diner-esque Snowdon Deli (5265, blvd. Décarie, map), west of downtown.