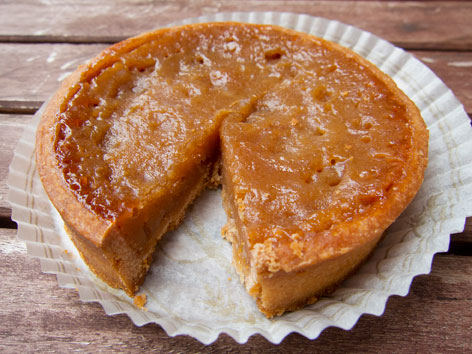 What: You can probably guess how a dessert that translates as “sugar pie” tastes, right? Like that other Québécois-dessert favorite, pouding chômeur, tarte au sucre is sinfully sweet and stupidly simple, consisting mostly of brown sugar (maple sugar, originally), heavy cream, and butter, with maybe some flour, eggs, and vanilla thrown in—more of those cheap staple ingredients likely designed to fatten up outdoorsmen come winter. It probably has French and Belgian roots, but the French-Canadian version is its own animal, with a sticky, grainy texture (similar to pecan pie’s filling, minus the pecans) and a level of sweetness on par with the Southern U.S.’s chess pie. It’s irresistible.

Where: We scored our tarte au sucre at regional boulangerie chain Première Moisson (7075, ave. Casgrain, map) at the Marché Jean-Talon, where it was tucked among a treasure trove of beautiful, sweet-smelling pastries, breads, charcuterie, and other gourmet goodies. The chain claims to focus on fresh, natural ingredients, and we learned this applies to its sugar pie, too, which is made with organic (unrefined) cane sugar, cream, and butter rather than the oft-used (and worse-for-you) shortening, palm oil, or animal lard.

Order: A large, full-size tarte au sucre costs $9.95; a small “tartelette” (pictured) goes for $3.25—and given how rich and decadent this pie is, the small size offered a nice taste. This pie boasts a sticky-sweet filling and a chewy, sugary crust. Divine.

Good to know: A similar pie also worth trying in Québéc is the tarte au sirop d’érable, or maple syrup pie, which we found in Montréal at La Fournée Des Sucreries de L’érable (514-279-7830; 450-295-3117), a small stand inside Marché Jean-Talon with a host of maple-syrupy delights (as well as savory fare like quiches and tourtières).