<< back to foods in Oaxaca 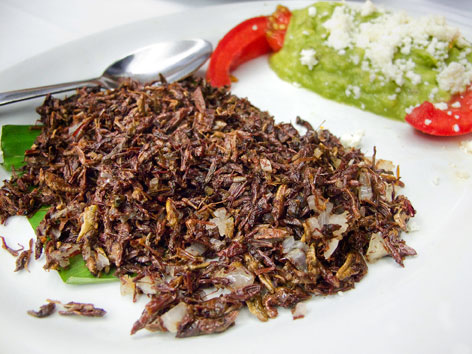 Chapulines are rust-colored grasshoppers, usually served fried and seasoned with chile, lime, garlic, onion, and/or salt, and they're nearly everywhere you look in Oaxaca—though they’re technically in season spring through early fall. They constitute an old food tradition in these parts as a cheap and plentiful protein, and they are so ingrained in Oaxacan culture that you kinda gotta try at least one if you're here. Bug phobes, be warned: These are whole, toasted grasshoppers that look like grasshoppers. There's no hiding the fact!

People who are fans describe them as pleasantly crunchy (hello, exoskeleton!) and, if they are cooked and seasoned well, salty and tangy—not unlike, say, a salt-and-vinegar potato chip. A common complaint, however, is that the insect's pesky little limbs tend to get stuck in your teeth. Keep an open mind ... and have a liquid chaser at the ready (they do go quite well with beer).

NOTE: We cannot in good conscience recommend eating a whole plate of chapulines, as they are still believed to contain high amounts of lead. Trying a few won’t hurt, though pregnant women and children should avoid them.

Where: Trying your chapulines in a restaurant is probably the least intimidating way to go about it. Our photo is from Casa de la Abuela (951-516-3544; Hidalgo 616, map) in the zócalo’s northwest corner, where the chapulines are fried in olive oil with minced onion and served with tortillas and guacamole. It's just an appetizer! Compare that presentation to the traditional way you'll find them, as straight-up fried grasshoppers in a bag at a market: dense, dark heaps; little limbs sticking out every which way.

Alternatively: Markets like Benito Juárez (Miguel Cabrera at Las Casas, map) are awash with indigenous ladies selling chapulines, should you dare, although you never can tell for sure whether you’re going to get a crispy, (comparatively) tasty bug or a stale one.


Want to read about the delicious ant larvae (escamoles) of Mexico City next? Or move on to more dishes in Oaxaca?