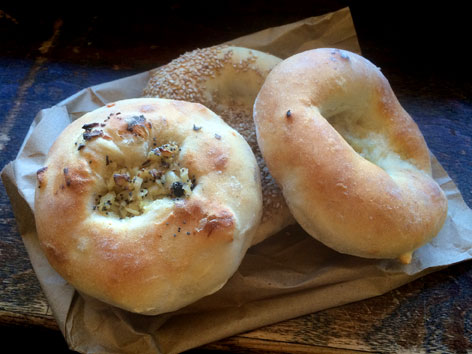 What: This round, crusty bread roll hails from Bialystok, a city in northeastern Poland, where a large Jewish population once enjoyed Bialystoker kuchen—the bread’s full name—as a daily staple before they were killed or forced to flee during the Holocaust. Nowadays Bialystok is unfortunately near devoid of bialys, according to Mimi Sheraton’s The Bialy Eaters, but they’ve happily found a home on New York City’s Lower East Side, thanks to immigrants. Here, it’s something of the beloved bagel’s overlooked, underappreciated cousin. Or, more kindly, the mature palate’s bagel alternative: smaller, less bready, baked (for seven minutes, exactly) rather than boiled, with an indented center boldly topped with savory toasted onions and, traditionally, a sprinkle of poppy seeds. They’re not nearly as prevalent as bagels, which makes them extra special—and a must for anyone interested in New York food culture. Bialys are best eaten warm, spread with some sweet butter or cream cheese.

Where: Iconic Kossar’s Bialys (367 Grand St., betw. Essex & Norfolk Sts., map) is synonymous with this bread in New York City, having been peddling its hand-crafted bialys since 1936, when it was founded by natives of Bialystok. (It is actually the oldest bialy bakery in the United States, though it has moved locations, originally opened on Clinton Street.) Bialys here are a precise art form combining high gluten flour, brewers yeast, salt, New York tap water, and freshly ground onions. The place itself is a no-frills, table-less kosher shop rich with the yeasty smell of baking bread, where you get your bialys and go.

Order: Pictured are the three basic bialy offerings: the classic onion, a garlic, and a sesame (90 cents each). Now, you have to remember that bialys are meant to be eaten warm—ideally with a nice schmear of butter or cream cheese—so while Kossar’s makes them fresh throughout the day, if yours aren’t just out of the traditional brick oven, bring them home to heat up. (Otherwise, you might get a disappointing mouthful of dense, cold bread.) Tubs of cream cheese and other toppings are available here, as are acclaimed hand-rolled bagels. We took ours home and relished the warm, fragrant, chewy rolls with butter and an afternoon coffee.

Alternatively: If not at the Grand Street shop, you can find Kossar’s bialys at other respectable Jewish eateries, like historic appetizing specialist Russ & Daughters (179 E. Houston St. betw. Allen & Orchard Sts., map), also on the Lower East Side. We recently enjoyed a delicious board of sturgeon, tomato, capers, red onion, bialy, and butter at the newer Russ & Daughters Cafe (127 Orchard St., map). It is also worth keeping an eye out for Hot Bread Kitchen’s various retail outlets; the Harlem-based bakery trains foreign-born, low-income women and men in the “multi-ethnic breads” industry, making everything by hand and working hard to preserve traditions—and its onion-and-poppyseed-topped bialys are very good. We picked up ours at our local Sunday Greenmarket in Jackson Heights, Queens.