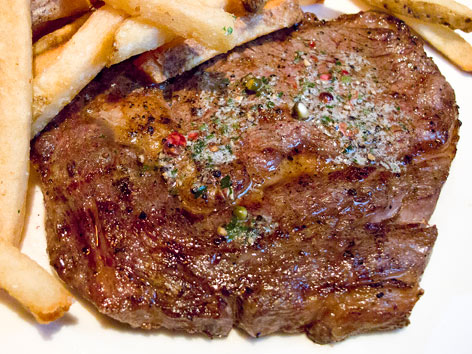 What: New York is synonymous with a number of steaks and steakhouses, from the dry-aged New York strip to the Delmonico; from the venerable Peter Luger in Williamsburg and dark-paneled Keens Steakhouse in midtown to Greenwich Village’s clubby Strip House—and everything in between. But cuts of meat are a tricky thing. The New York strip (large side of a T-bone, with the bone still on), so-called for being popularized here once upon a time, goes by several other names, including the Kansas City strip. The Delmonico steak, named for Delmonico’s Restaurant in New York’s financial district, is most commonly associated with a rib eye, though it likely originated as a boneless top loin and can now refer to several other cuts as well. Rather than dwell, then, on butchering techniques, we are focusing on the Delmonico steak for its unambiguous New York City roots—inside a lower Manhattan kitchen sometime in the 1850s—and definitive preparation, as laid out in an 1894 culinary treatise called The Epicurean, written by Delmonico’s most celebrated chef de cuisine, Charles Ranhofer.

Where: In the financial district, its corner entrance marked by two marble pillars reputedly brought from Pompei by one of the original Delmonico brothers, Delmonico’s Restaurant (56 Beaver St. betw. Broad & William Sts., map) claims many inventions and firsts (including that of “America’s first fine-dining restaurant” and first eatery to use tablecloths and printed menus). The steakhouse, built in the same space as the 1837 original (which was not the first building Delmonico’s occupied), is not actually connected to the Delmonico family at all, but we respect the place’s adherence to tradition—not only in reinstating the opulent dining rooms and power-player clientele, but also in serving all the famous Delmonico dishes, including its eponymous steaks. The bar area, called the “Next Door Grill,” is more casual in atmosphere and price.

Order: Inside the restaurant, the Delmonico steak—a vintage all-natural Angus boneless rib eye—is 18 ounces and costs $48; sides are à la carte, including the “classic Delmonico potatoes” that were once an automatic accompaniment (they’re now $12). A better, if slightly less traditional, deal is in the Next Door Grill, where the Delmonico steak frites (pictured) costs $26—it’s the same succulent, nicely marbled rib eye, just a bit thinner and smaller (10 oz), and the thick-cut fries are terrific. The preparation for both of these Delmonico steaks is the same, as per Chef Ranhofer’s original instructions: sprinkled with salt and pepper, basted with butter, broiled to order (we like medium-rare), and topped with “maître d’hôtel butter,” or herbed butter. It’s a darn good piece of meat.

Good to know: Among Delmonico’s other claims to fame are lobster Newberg, chicken a la Keene, eggs Benedict, and baked Alaska. All are still on the menu today.

Alternatively: It can be argued that the true New York steak experience has less to do with the preparation of the meat—and, indeed, its actual cut—and more with the old-school steakhouse tradition: the no-frills dining room, the gruff and formal waiters, the huge plate of sizzling meat, the wonderful á la carte sides, the astronomical bill. And for all of that, Peter Luger (178 Broadway, Williamsburg, map) has been it since 1887. Much like Miami’s Joe’s Stone Crab, it is worth at least one visit in your lifetime—ideally when someone else is paying.