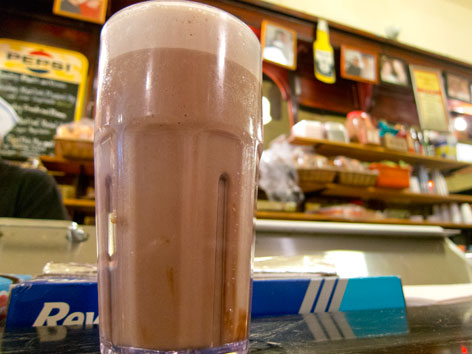 What: Containing neither egg nor cream, the egg cream was reportedly invented by Jewish candy-store owner Louis Auster in Brooklyn in the late 19th century...or it might have been another guy on the Lower East Side; competing claims abound (and no one knows where the name actually came from, but it might be derived from the Yiddish echt keem, meaning “pure sweetness”).

All we can say for sure is what it is today: a simple soda-fountain concoction made of cold milk, pressurized seltzer (not poured from a bottle), and chocolate syrup, though not just any chocolate syrup. Purists won’t look twice at an egg cream that doesn’t use Fox’s U-Bet, a thin syrup with early ties to the so-called Brooklyn egg cream and a unique taste thanks to the real cocoa and dry milk powder it’s made with (it also contains high-fructose corn syrup, unfortunately, unless you get your hands on a Kosher for Passover bottle, released every spring, which uses sugar). When prepared correctly, the result is a light-and-simple subtly chocolaty, frothy drink—its foamy head almost resembling a beaten egg white—that makes you feel like a kid again.

Good to know: One “expert” claims the truly authentic egg cream must be assembled in a particular way so that there is a chocolate dot on the top of the head. We have never seen this dot, and are not such sticklers for ingredient order. Also, vanilla egg creams, made with vanilla syrup, exist as well; they are just not as common as chocolate ones.

Where: Part of the fun of experiencing an egg cream is a good old-school environment, and it’s hard to beat the vintage, no-frills lunch counter at Eisenberg’s Sandwich Shop (174 Fifth Ave. nr 22nd St., map), established in 1929. Just a block from the elegant Flatiron building and pretty Madison Square Park, it’s a true-blue-New York gem of a luncheonette.

Order: An egg cream ($2), of course! Made with U-Bet chocolate syrup and plopped down unceremoniously in front of you, it’s a quintessential specimen, with a lovely refreshing, sweet frothiness (incidentally, it is also often served in one of those classic plastic diner cups). Pair it with one of Eisenberg’s signature satisfying sandwiches, like the beloved tuna melt or a BLT. Reubens, egg salad, chopped liver—you get the picture. You can also try another NYC blast-from-the-past here: the malted milkshake.

Alternatively: For a real-deal egg cream, your best bet is a humble diner, deli, or luncheonette in the city. Since 24-hour newspaper-and-cigarette shop Gem Spa closed in the East Village during the coronavirus pandemic, we have yet to find our new favorite in the East Village (suggestions welcome!). In Prospect Heights, Brooklyn, we have a soft spot for family-owned, 75-year-old Tom’s Restaurant (718-636-9738; 782 Washington Ave., map), not only for its tasty egg cream—which, in a nontraditional but delicious twist, comes topped with whipped cream unless otherwise requested—but also for its legendarily cheerful customer service. (Likewise in the nontraditional-but-tasty corner: We have recently gotten wind of a slew of newfangled flavored egg creams (think mango, tamarind, strawberry) sold alongside the traditional ones at 24-hour Ray’s Candy Store (113 Ave. A nr. 7th St., map), in the East Village.) In Carroll Gardens, Brooklyn, newer kids in town Brooklyn Farmacy & Soda Fountain (513 Henry St., map) have taken care to re-create a nostalgic ambience, down to the old-school egg creams. For a more complete list of recommendations, see this excellent guide to NYC egg creams.