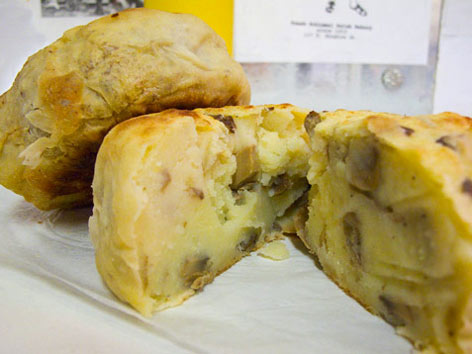 What: Steaming-hot, fist-size potato snacks, knishes are wrapped in paper-thin pastry dough and baked or fried. Result: filling, cheap comfort food in small portable packages. They have been a NYC food fixture—if a less prevalent one, in recent years—since Eastern European immigrants introduced them here around the late 19th century. Besides plain potato, popular varieties include sweet potato, mushroom, spinach, broccoli, cabbage, and kasha, which is made with roasted whole-grain buckwheat.

Where: Avoid the street versions, as they generally give the knish a bad name (heavy, soggy, dry). Instead, head downtown to the most famous knishery, Yonah Schimmel Knish Bakery (137 E. Houston St., betw. First & Second Aves., map), dispensing knishes on the Lower East Side for 100 years.

Order: You can’t go wrong with classic potato or kasha ($3.50), though we like the decidedly less traditional jalapeño knish here, when available as a special ($5). The cold borscht—served in a tall glass—is also very good, refreshing and on the sweet side.

Alternatively: We love the venerable Knish Nosh (three locations, including the original at 100-30 Queens Blvd. in Forest Hills, Queens, map) and its moist baked knishes ($3). Use the Hebrew National yellow mustard generously and wash it down with a Dr. Browns soda.