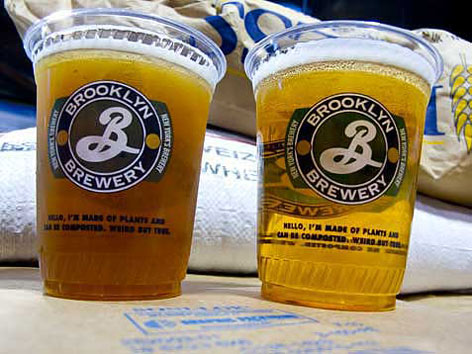 What: There’s a long tradition of local-beer-making in New York City (thanks, Germany!), but, like other cities around the U.S., Prohibition and big-brand competition from mass breweries took a big toll on output. Brooklyn, for example, was home to at least 48 breweries a century ago. The borough’s sudsy good times had dried up by the mid-1970s, but in the last two decades, Brooklyn has reasserted itself as a major player in the U.S. craft beer world. It is now home to three big craft breweries, and growing: The best known is Williamsburg-based Brooklyn Brewery, born in 1987; its brewmaster is a major spokesperson for U.S. craft beer and its brews—especially the ubiquitous flagship Brooklyn Lager—are found far and wide around the country and beyond. Over in Red Hook is the fast-growing Sixpoint Craft Ales (so popular it’s had to move some of its brewing to Wilkes-Barre, Penn.), known for producing innovative, hoppy beers, especially with its limited, experimental Mad Scientist series (think spelt wine, a bock beer mixed with cold-pressed Stumptown Coffee, etc.). Its signature Sweet Action cream ale and Brownstone brown ale, among others, routinely show up all around the city, on tap and in 16 oz cans. Out of Clinton Hill comes KelSo Beer Co., which uses local ingredients when possible and has garnered attention for its full-flavored, (relatively) low-alcohol beers; it’s celebrated for its pilsner but also experiments with small-batch stuff. Newer (and smaller) on the Brooklyn scene is Other Half Brewing Company in Carroll Gardens, specializing in big, hoppy beers and farmhouse ales.

Of course, NYC craft brewing does not live and die in Brooklyn. Quite the contrary. Manhattan has a bunch of brewpubs (see below) and more recent years have seen something of an explosion of new breweries in Queens and the Bronx. SingleCut Beersmiths created a stir when it opened its Astoria brewery in December 2012, staking its claim as the first Queens beer brewery to operate since pre-Prohibition. SCB already has a nice stable of five year-round brews and takes pride in brewing entirely in Queens. In Long Island City is Rockaway Brewing Company—with origins, you might guess, in a Rockaway beach bungalow—and in Maspeth is the teeny “nano-scale” Bridge and Tunnel Brewery, crafting dark, flavorful beers in 1.5-barrel batches (get ’em while you can!). Newer still is Transmitter Brewing, under the Pulaski Bridge in Long Island City and known for experimenting with wild yeasts for its French- and Belgian-style farmhouse ales; in the same ’hood you’ll also find Big Alice Brewing, another nanobrewery doing unusual, super small-batch beers. And in Glendale, there's an exciting range of brews to be tried at Finback Brewery.

Up in the Bronx, the Bronx Brewery is all the rage: It has brewed commercially with a partner in Connecticut since 2011 and currently offers more than five takes on the pale ale, plus a few barrel-aged versions (bourbon, gin, zinfandel); it’s soon setting down brick-and-mortar roots on Bronx soil (the brewery is expected to open in summer 2014). Gun Hill Brewing beat them to the punch as far as brewing in the Bronx, and two other Bronx breweries contract-brew outside the city (for now): Jonas Bronck’s Beer Company and City Island Beer, with a pale ale and a black ale on the market.

Also in the contract-brewed-upstate-but all-NYC-in-spirit camp is the decade-plus-old Harlem Brewing Company, known for its flagship Sugar Hill Golden Ale, a medium-bodied American-style ale intending to evoke the jazzy days of the Harlem Renaissance. HBC hopes to open a brewery in Harlem soon.

Lastly, the so-called “forgotten borough” is finally in the craft-beer game: With four solid, approachable beers, Flagship Brewing Co. is Staten Island's only operating brewery, and rumor has it it's a good one.

Where: The wind-powered, recently expanded Brooklyn Brewery (79 N. 11th St., map), on an industrial stretch of Williamsburg—and by industrial, we mean “around the corner from countless other hip bars/restaurants,” including a LEED-certified bowling alley—is a cool place to try and buy some of Brooklyn’s beers, including its more interesting bottle-conditioned offerings (depending on stock) like Black Ops (imperial stout), Sorachi Ace (saison), and Schneider-Brooklyner Hopfen-Weisse, the IPA-meets-wheat-beer result of a Brooklyn collaboration with Germany’s Schneider brewery. Flights aren’t offered, but you can try up to four of the eight taps before purchasing a pint ($5 or 5 for $20; buy tokens at entrance); we liked the flavorful Blast! double IPA of the day’s offerings.

Brewpubs & more: In March 2014, the first brewery/restaurant came to Brooklyn in the 6,000-square-foot Dirck the Norseman (7 N. 15th St., Greenpoint, map) and its in-house five-barrel brewery Greenpoint Beer & Ale Co.; in addition to offering about 10 taps of its own brew, the venue features a handful of (mostly German) imports. Manhattan mini-chain Heartland Brewery (multiple locations including 35 Union Sq. W. at 17th St., map) is the borough’s most visible (and average) brewpub; its beers, incidentally, are brewed at Greenpoint Beerworks alongside KelSo’s tanks (both share the same brewmaster). (Chelsea Brewing Company has sadly closed its space at Chelsea Piers, but you can still find some of its beers distributed at bars around the city, such as Midtown's The House of Brews.)

On the roof of Italian-food mecca Eataly, in the Flatiron District, don’t miss Birreria (200 Fifth Ave. betw. 23rd & 24th Sts., map) and its three unfiltered, unpasteurized house-brewed cask ales by (Delaware-based) Dogfish Head’s celebrated brewmaster, in collaboration with innovative Italian breweries Baladin and Del Borgo. The bar serves about 10 other good beers on draft and 30-plus in bottles.

Lest we forget the quirkiest microbrewery in NYC, there’s the seasonal Coney Island Brewing Company (summers, Fri-Sun only (call ahead to check); 3008 W. 12th St., map), next to the Freak Show in Coney Island, Brooklyn. An outpost of upstate’s Shmaltz Brewing Company (creators of the Coney Island Craft Lagers line of beers), the Coney Island storefront brews only fun, experimental, locally-inspired one-gallon batches of beer (think Korndog Kolsch, flavored with actual hot dogs). Inside the teeny space, you can buy a bottle of whatever is available, dump it into a plastic cup, and take it outside—open-container laws be damned. (They look the other way here.)

Good to know: A gastronomic temple to all the good things in life, Bierkraft (191 Fifth Ave., map) in Park Slope, Brooklyn, is a must for beer fanatics in NYC—1,000-plus bottled beers in stock; gourmet goodies like cheese, chocolate, and charcuterie. But best of all are the 16 (mostly regional) beers on tap, including two casks, that are available for in-house drinking at indoor-outdoor tables or in half-gallon growlers to go. Similar but smaller is the East Village’s Good Beer shop (422 E. 9th St. betw. First Ave. & Ave. A, map), where you can browse a carefully curated, domestic-focused selection of 600-plus bottles or sample what's on draft via $6 pints, $8 tasting flights, or takeaway growlers.