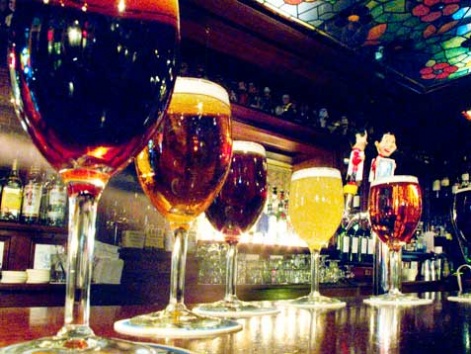 What: Philadelphia is yet another of those once-thriving American brewing cities whose beer industry never really recovered post-Prohibition (see NYC and New Orleans, for starters). But the last few years have brought national attention to Philly’s beer scene—not only because of the dozen or so excellent craft breweries in the larger eastern Pennsylvania region, but also because of the sheer number of bars and brewpubs in which to drink beer in the city. Really good, handcrafted regional (or otherwise domestic) and international craft beer. You will not go thirsty here.

Where: Of Philly’s brewpubs, we like the award-winning Nodding Head Brewery & Restaurant (pictured), a cool gastropub with a solid selection of seasonally changing beers; Grog, a dark, malty session beer, is often one of around seven offerings. Rather generous samplers (pictured) are offered for $12-$15 depending on what’s on tap. March 2015 update: Nodding Head has closed its Center City location, and is currently looking for a new home (or homes). Check its website for the latest news.

Breweries: There are two distributing breweries within the city’s limits. Yards Brewing Company (901 N. Delaware Ave., map), established in 1994, is the producer of five signature ales (including the locally beloved Extra Special Ale), a few seasonals, plus the Ales of the Revolution, a line of beers based on the founding fathers’ original brewing recipes (in partnership with historic pub City Tavern, where the beers are available). Philadelphia Brewing Company, or PBC (2439 Amber St., map), also with five year-round beers, is celebrated for its community involvement (which includes using fresh, locally grown hops in its autumn seasonal, Harvest from the Hood) and beautifully restored 19th-century brewery, located in the Kensington neighborhood. (PBC, incidentally, was launched in 2007 after a partnership breakup with Yards, prompting Yards to relocate to its current 100%-wind-powered brewery in the Northern Liberties neighborhood.)

Good to know: Other regional craft breweries to look out for while drinking in Philly include Sly Fox, Victory, Tröegs, Stoudt’s, Weyerbacher, and Lancaster Brewing Company, all of eastern Pennsylvania, and Flying Fish of nearby Cherry Hill, NJ. (The country’s oldest brewery, Yuengling, doesn’t qualify as a craft beer, but we’re still fans.)

Beer bars: Chances are you’ll become acquainted with the area’s beers in a local bar or restaurant—of which there are many with a fine craft beer list. Some favorites pouring regional drafts include sister gastropubs Standard Tap (901 N. 2nd St., map) and Johnny Brenda’s (1201 N. Frankford Ave., map), both of which do all-local, all-draft beers including two cask-conditioned brews; Royal Tavern (937 East Passyunk Ave., map), which also does an award-winning burger; and the 150-year-old McGillin’s Olde Ale House (1310 Drury St., map), whose eastern PA-focused draft list includes three of its own house beers, brewed by Stoudt’s.

If you’re hitting up one of Philly’s many BYOB restaurants, swing by the The Foodery (two locations: 324 S. 10th St., map, and 837 N. 2nd St., map) to create a customized six-pack from 800-plus U.S. and international craft beers; much like Brooklyn’s Bierkraft (see: NYC, local craft beer), it also does beer tastings and events.