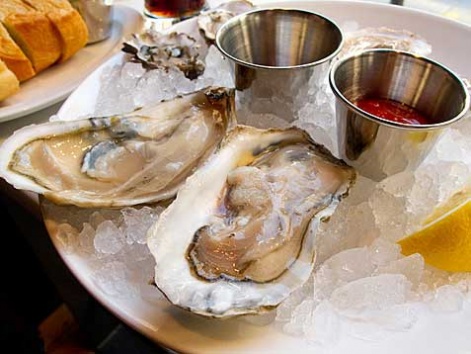 What: Thanks to Philadelphia’s location, and especially its proximity to the Chesapeake Bay and once bivalve-rich Delaware Bay, oysters have always been big here. Nowadays, most of them aren’t coming from down the river anymore, but the Mid-Atlantic region still turns out some really tasty, plump oysters. The area’s most traditional bivalves—the ones the local old-timers ask for—come from Chincoteague Bay in Virginia.

Where: The Oyster House (1516 Sansom St., map) has a rotating daily selection of fresh oysters, many of them from the East Coast (Cape May, NJ; Nasketucket Bay, MA; Chesapeake Bay, VA); the Chincoteague Bay bivalves are a constant presence when available.

Order: A half-dozen plump, salty Chincoteague Bay oysters on the half shell ($14; prices range depending on the oyster variety)—though keep in mind these are best between January and March. Ask your server what’s good for the time of year you’re there.

Good to know: The Oyster House’s happy-hour buck-a-shuck deal—$1 oysters—runs Monday through Friday from 5pm-7pm and Saturday from 9pm-11pm. There are also deals on drinks, of course.