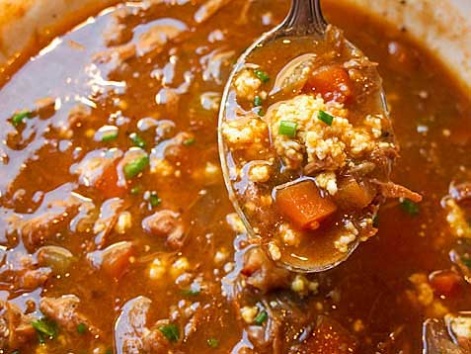 Much like the heralded turtle soup of New Orleans, Philly’s snapper soup is dark, thick, and complexly flavored, made with the meat of the snapping turtle (not to be confused with “red snapper soup”!) and finished tableside with sherry to taste. Turtle soup apparently goes way back in the area (dating to the 1750s, even!), and used to be made with actual green sea turtles. Thankfully by the mid-1800s, Philadelphians were forced to turn to the snapper turtles found in their own local marshes and swamps.

The long-running, now-defunct Philly restaurant Old Original Bookbinder’s took this regional love for snapper soup and ran with it, securing the dish in the annals of Philadelphia's culinary history. While the restaurant closed years ago, Bookbinder's continued to sell its snapper soup in a can for a long while, but as of our last update (2021), that doesn't seem to be the case anymore.

Where: The Oyster House (1516 Sansom St., map) did a meaty snapper soup in bright, modern surrounds. As of 2021, we no longer see it on the menu, however. Please see our alternatives below.

Order: The snapper soup ($7), which came loaded with turtle meat, chopped carrots and celery, and bits of hard-boiled egg; sherry is served on the side. Also try the raw oysters here, and perhaps that other (surprising) Philly classic, fried oysters and chicken salad.

Alternatively: We recently learned that Elwood, a BYOB farm-to-table restaurant in Fishtown (1007 Frankford Ave., map) that specializes in historic regional cuisine, carries snapper soup! But we don't know of many others in Philadelphia, so please let us know if you do in the comments.