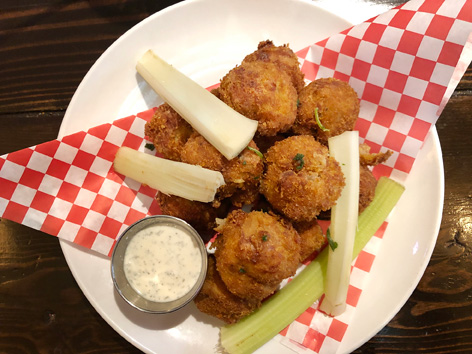 Funeral potatoes are a crowd-pleasing cheesy potato dish commonly served at, you guessed it, funeral luncheons … but also holidays and other non-morbid potluck meals. They are most associated with, but not exclusive to, Mormon gatherings in Utah, and the dish itself is popular across several Western and Southern states: It’s just a rather decadent casserole of cubed or shredded potatoes, cheese, sour cream, and onion topped with crunchy, buttery corn flakes.

It’s a home-cooked dish you don’t usually see at restaurants—it’s a casserole, after all, designed to feed (and console?) a crowd. But there’s at least one restaurant in the Utah Valley offering this quintessential Utah dish … with a twist.

Where: In historic downtown Provo, Station 22 (22 W. Center St., map) is a hip, inviting restaurant that specializes in the tasty and decadent, with a lot of updated American classics (fried chicken and waffles, burgers and fries, Nashville hot chicken, cheesesteak) and also some reinvented Utah icons, like its yellow-hued fry sauce and its deep-fried funeral potatoes. Yes, we said deep-fried.

There’s also a giant specialty soda wall, testament to this state’s love affair with carbonated sugary drinks. We recommend the root beer on tap (there is no alcohol served).

Order: The deep-fried funeral potatoes ($7), a pile of deep-fried, parsley-studded cheesy potato balls presented alongside celery sticks and ranch dressing. These, of course, look nothing like traditional funeral potatoes, but with one bite you get the flavor and texture profile: savory, cheesy, toothsome, soft, with that crunchy exterior. We only wish the restaurant encrusted these in corn flakes.

Alternatively: Please let us know in the comments if you know of any other restaurants serving any form of funeral potatoes!