<< back to foods in Santander 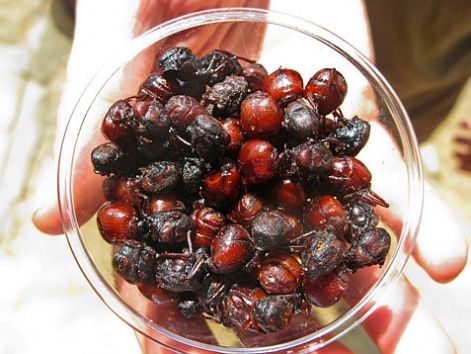 For centuries, hormigas culonas, or “big-bottomed ants”—a type of large leaf-cutter ant, always female—have been a regional delicacy and source of local pride in Santander, Colombia. Harvested in the spring, the hormigas santandereanas are quite nutritious, packed with protein and low in saturated fat; some locals like to tout their aphrodisiac qualities. They’re served in corner stores either fried or roasted with salt (and served in small containers or bags); more upscale establishments give them the gourmet treatment.

Of course, any way you have them, these hormigas are relatively unadorned insects you’re eating. In other words: Don’t look too closely if you're squeamish.

Where: Barichara is a great place to try these, if you dare. Look for the crunchy, salty roasted hormigas over the fried ones, which are more coffee-ground-like in texture; there’s a little tienda on Carrera 5 between Calles 8 & 9 that sells them in small amounts for 10,000 COP—as these are delicacies, they aren’t cheap.

When: The season for these hormigas is primarily April and May.

Alternatively: You can also find these in shops around San Gil and Bucaramanga.