<< back to foods in New Orleans 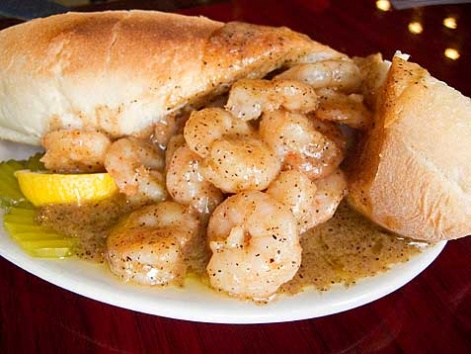 Good news: We've done your New Orleans po'boy homework for you. You know it's a must-try dish here, and now you can weigh your options in terms of popular types, recommended places, and prices. We've broken up our coverage into meat- and seafood-dominated sandwiches (see roast beef/debris po'boys and fried seafood po'boys), as well as this special po'boy, the BBQ shrimp. But first, the history.

Po’boys, it must be said, are large submarine/hoagie/grinder-type sandwiches with a funny name. But the New Orleans po’boy, popular at lunch among working locals, is notable because (a) the bread is always a fluffy, crunchy baguette-like French loaf and (b) it’s most often filled with high-quality fried seafood (shrimp, oysters, catfish, soft-shell crabs) or roast beef.

The etymology of the name is not entirely clear, but the most likely story involves a restaurant that, during a 1920s transit strike, provided free, large sandwiches to the transit worker “poor boys.” Nearly all po’boys have the option of coming “dressed,” which entails the addition of lettuce, tomato, and mayo. There are exceptions, of course (like this BBQ shrimp po’boy), but no matter what, you know you’re getting delicious, filling comfort food that’s sure to satisfy.

Where: Casual locals’ favorite Liuzza’s By the Track (1518 N. Lopez St., map) in Mid-City is celebrated for this po’boy. Its BBQ sauce is extra peppery, its shrimp fresh and plump. Because it's located near the Fairgrounds Race Course, Liuzza's is a super popular stop for horse racing fans and, come spring, Jazz Fest goers.

Order: The BBQ shrimp po’boy ($15.95) is the signature dish here, and one that should most definitely be ordered. We also hear the Creole gumbo, “breathtaking beef” (garlic-stuffed roast beef), and garlic oyster po’boy are worth making the trip for. Definitely try an Abita Amber here; it’s served in big, frosty, chalice-like glasses (see local craft beer) that make it taste better than it actually is.

Good to know: From the French Quarter, it’s very easy to get to Mid-City (the ’hood of Parkway Bakery & Tavern, too; see fried seafood po’boy) by taking the Canal Street streetcar. Mid-City has a wonderful neighborhood feel. If you’re there during the day, spend some time exploring nearby City Park, Bayou St. John, and St. Louis Cemetery #3.

Alternatively: During weekday lunch, Uptown Italian-Creole restaurant Pascal’s Manale (1838 Napoleon Ave., map), which invented BBQ shrimp back in the 1950s, offers a BBQ shrimp po’boy, for which the French bread is similarly hollowed out and the saucy (peeled) shrimp poured in.