<< back to foods in North Jersey 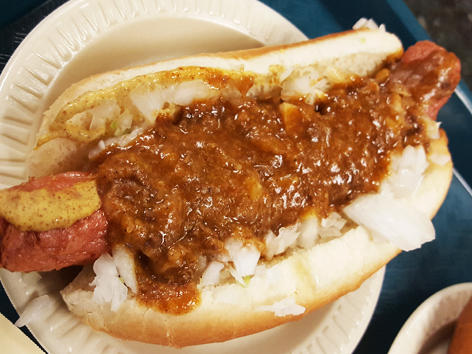 The Texas weiner is a deep-fried hot dog topped with a Greek-inspired aromatic meat chili (never with beans). If you order it “all the way,” it comes with mustard and raw onion as well. Despite its name, the Texas weiner was invented in Paterson, New Jersey, during the 1920s—it’s believed by some that the name was a marketing gimmick used to capitalize on the success of the Western films popular in Hollywood at the time. Whatever the reason, the moniker and the dish stuck!

Greek-American culture had a tremendous influence on the evolution of the American chili dog. What differentiates the Texas weiner from a traditional chili dog is, well, the chili. Here it is derived from saltsa kima, the Greek meat sauce (typically served over spaghetti) that contains spices such as cinnamon, allspice, cumin and cloves.

In certain parts of North Jersey, the Texas weiner is a micro indigenous food you just can’t miss. (Also don't miss NJ's other regional hot dog styles, like the Italian hot dog and the Ripper.)

Note: For all you grammar police, while the proper spelling of the German word for hot dog is “wiener,” it is common to see the transposed i-e on many Jersey menus.

Where: Confined mostly to Passaic County, just a 15-mile straight shot from NYC’s George Washington Bridge, the Texas Weiner is a ubiquitous menu item at many delis, restaurants, and hot dog trucks throughout a 10-town area. While each community tends to have a favorite, with a loyal customer base, we suggest you try these two classic joints: The Hot Grill (established in 1961; 699 Lexington Ave., map) in Clifton and Johnny and Hanges (est. 1939; 23-20 Maple Ave., map) in Fair Lawn. Pictured is an “all the way” Texas weiner from the Hot Grill.

Order: A Texas weiner “all the way” ($2.90; $3.40 with cheese). We encourage you to order a side of house-made onion rings or fries and wash it all down with a milk shake.

Alternatively: Passaic County has lots of options for this dish, and we’d love to know your favorite! We’ll give a shout-out to a spot we like 25 miles northwest of Paterson, still within the county confines: old-school hot dog spot Paul’s Place in Hewitt, NJ, at the southern end of pretty Greenwood Lake. We appreciated both the outdoor picnic tables for diners and the less-than-$3 Texas weiners all the way. —Contributed by Adam Horvath (Foodigenous)