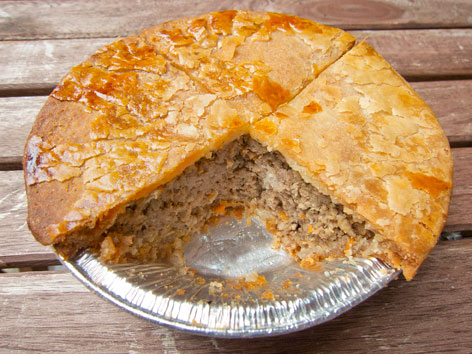 What: A traditional French-Canadian meat pie rich in regional variations, the Québécois tourtière (“tour-tee-air”) is made of finely ground meat (commonly pork, beef, or veal) and spices like nutmeg, cloves, and cinnamon, encased in a flaky pastry shell. It’s a common holiday dish, prepared around Christmas/New Year’s, and is often eaten with a relish-like homemade ketchup (similar to pâté chinois).

While it’s generally accepted that the dish has been present in Québec for several centuries—no doubt having been influenced by the older savory pies of France and England—the origins of its name are unclear: It might have come from now-extinct tourtes, or passenger pigeons—once cooked into the pies—or it might be named for the deep baking dish used to make the pies. Within Québec, tourtière is perhaps most famously associated with the Saguenay–Lac-Saint-Jean region (where it often includes potatoes, too), but it’s well represented in and around Montréal as well.

Order: Tourtières maison, a veal, pork, and beef mix, cost $9.49/kilogram here, across several sizes (smalls are in the $5 range); other varieties of pie on offer during our visit were canard (duck), gibier (game, which is bison and pork), and agneau (lamb).

To eat, heat the pie at around 300°F for 30 minutes or until heated throughout. Ours turned out beautifully flaky outside and flavorful within, with finely ground meaty innards augmented by diced carrot, celery, and spices. In addition to tourtières, Maison du Roti is also a good source of tarte au sucre and prepared pâté chinois.

Alternatively: Regional boulangerie chain Première Moisson (7075, rue Casgrain, map), at the Marché Jean-Talon, is another great specialty store for heat-and-serve meat pies. For the ovenless: Among the restaurants serving tourtière by the slice are La Binerie Mont-Royal (367, ave. du Mont-Royal Est, map), that bastion of homemade Québécois comfort food, where the beef-pork tourtière is good but a little less seasoned.