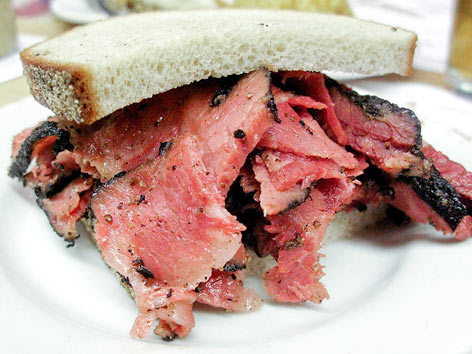 What: Jewish-deli red meat, generally beef brisket or navel (a.k.a. the plate cut), that’s been cured in brine, well seasoned with a spice rub, slow-smoked, and then steamed, before being sliced and served hot piled between two slices of rye. The addition of mustard gives a spicy tang to the moist beef. What began as an clever way for impoverished Eastern European Jewish immigrants (most likely from Romania, in this case; “pastrami” is derived from the Romanian pastramă) to preserve cheap cuts of meat in the late 19th century has turned into one of the city’s most iconic foods. This is classic New York on a plate.

Where: Katz’s Delicatessen (205 E. Houston St. at Ludlow St., map) remains the place for pastrami (as well as corned beef and brisket), and rightfully so: Not only is it a neon-signed NYC original (since 1888) and the site of the famed “I’ll have what she’s having” scene from When Harry Met Sally, but its peppery, smoky hand-carved pastrami is mouth-melting, juicy perfection. Some people make the mistake of writing Katz’s off as a tourist trap—then they go there and are blown away by its deliciousness. (True story.)

Order: Pastrami on rye (alas, not double-baked rye) with mustard ($15.95). Some people prefer it “lean” or “fatty”; if you order your sandwich at the counter, you’ll get a preview taste of the meat. Also excellent here is the matzoh ball soup, the dry-cured corned beef sandwich, Reuben sandwich (corned beef, Swiss, sauerkraut, Russian dressing), and knoblewurst (garlic beef sausage). Wash everything down with a Dr. Brown’s soda (the Cel-Ray, or celery soda, is the most New York of the bunch) or a Katz’s Ale, made by Brooklyn Brewery for the deli.